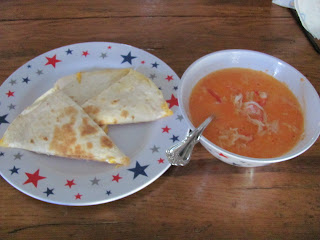 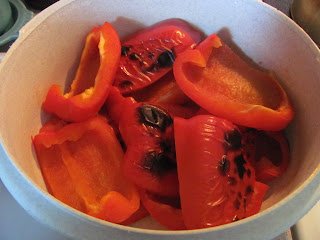 Directions
Set the oven to broil, and preheat for 5 minutes. Place the red bell pepper quarters skin-side up on a broiler pan or baking sheet. Broil until the skins have blackened, then place them in a brown paper bag, or in a covered bowl and allow them to steam for approximately 10 minutes to loosen the skins.
Once the skins have loosened, peel them off and discard. Coarsely chop the peeled, roasted peppers, and place into a large saucepan along with the chicken broth and chopped potato. Bring to a boil over high heat, then add the half-and-half, salt, cayenne pepper, garlic powder, and basil. Return to a boil, then reduce heat to medium and simmer for 45 minutes. Once the potatoes have softened, puree the soup in batches in a blender until smooth. Pour the pureed soup into another saucepan and stir in the crab. Heat over medium heat to warm through, about 5 minutes.


Recipe courtesy: Lisa B of Ohio
Posted by Nikki at 3:38 PM

Search by ingredient or recipe name

Welcome to our kitchens

Recipes? Questions? Feedback? We want to hear from YOU! Contact us at the email address below.